Muscle Car of the Week: ’71 Javelin 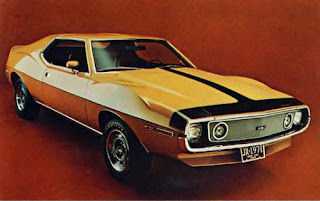 This week we’re going to be looking at a car that, in our opinion, often gets over looked in the muscle car restoration cliques across the country – the 1971 AMC Javelin.

Originally an upgraded AMX, the Javelin restyled it’s entire body in ’71, ushering in the second (and sadly, last) generation for the model. The new design was so drastic in fact, that AMC made excuses for it in it’s brochure saying that it’s, “Styling [was] so hairy we even risked turning some people off.” While this isn’t exactly a glowing recommendation, it seems that it was right on the money. Sales dropped almost 4% compared to 1970.

Some of the changes made that year however are actually what give the car its flare, and the reason we fully endorse the ’71 Javelin as a top auto restoration choice. These include a slick new integral roof spoiler and sculpted fender bulges that were a nod of the hat towards the popular Corvette design. The Javelin also got a touch longer in ’71 and the wheel base was wider. All of these factors led famed author Richard M. Langworth to describe the car as having, “the wet T-shirt look: voluptuous curves with nary a hint of fat.”

The body design was not the only change for the Javelin that year. Under the hood saw a serious upgrade as well. In place of the top engine choice from ’68-’70, the 390 V8, AMC kicked it up a notch with a brand new and beefy 401 cubic inch V8! This bad boy scored well during chassis dynamometer testing and was able to make a quarter mile in the mid-14 second range.

In most internet auctions we’ve come across you can pick up a fully restored Javelin for anywhere from $10K-$25K.